The coupling of a scanning flow cell to an inductively coupled mass spectrometer allows for the online detection of electrochemically dissolved metals. A variety of in-house cell designs allows for the application to a variety of materials. Solid metals, gradient alloys or dropcast catalyst inks are placed on a movable stage underneath the cell, allowing for rapid scanning from one measurement to the next.

While performing an electrochemical measurement, metal species are dissolved and travel downstream at a controlled flow rate via a peristaltic pump and are introduced into the ICP-MS. Sample introduction begins with the nebulizer creating a fine electrolyte mist in the spray chamber, of which a small portion enters the ICP torch plasma. The plasma is directed into an ion deflector and the ion mass composition is analyzed via a quadrupole mass filter. Detected ions create a time resolved signal of dissolution which can be directly coordinated to the applied potentiostatic or galvanostatic conditions.

To extend the capabilities of the scanning flow cell (SFC) in order to study the degradation of photocatalysts and photoelectrocatalysts, a light source was introduced to the system. The light is emitted from a light emitting diode (LED) and directed to the cell with a glassfiber cable to illuminate the working electrode from the top. The LED wavelength of λ = 385 nm corresponds to an Energy of E ≈ 3.2 eV which is enough to excite the band gap of all relevant photo(electro)catalysts in the visible spectrum.

Coupled to our established ICP-MS downstream analytics the photoelectrochemical SFC makes an efficient tool to quantify degradation of photo(electro)catalysts on-line.

Recently we purchased a Xenon lamp as additional light source. Coupled to an AM1.5g filter or a monochromator we extended our capabilities to research on photoelectrocatalysts in realistic conditions and quantum efficiency measurements.

On-line electrochemical mass spectrometry (OLEMS) or differential electrochemical mass spectrometry (DEMS) is a technique used in electrochemistry for time- and potential-resolved analysis of gases or volatile species formed on the working electrode. In typical OLEMS/DEMS cells a gas transparent membrane is used to divide the electrochemical environment from the high vacuum of a mass spectrometer. Most cells are stationery. By attaching gas MS to an SFC, however, this technique can be used in the fast scanning mode. This allows utilization of SFC-OLEMS in both fundamental research (e.g. identification of IrO3 intermediate during oxygen evolution reaction on Ir electrodes) and high-throughput electrochemistry (e.g. screening CO2 reduction selectivity towards CH4 and C2H4 on CoCu gradient libraries). 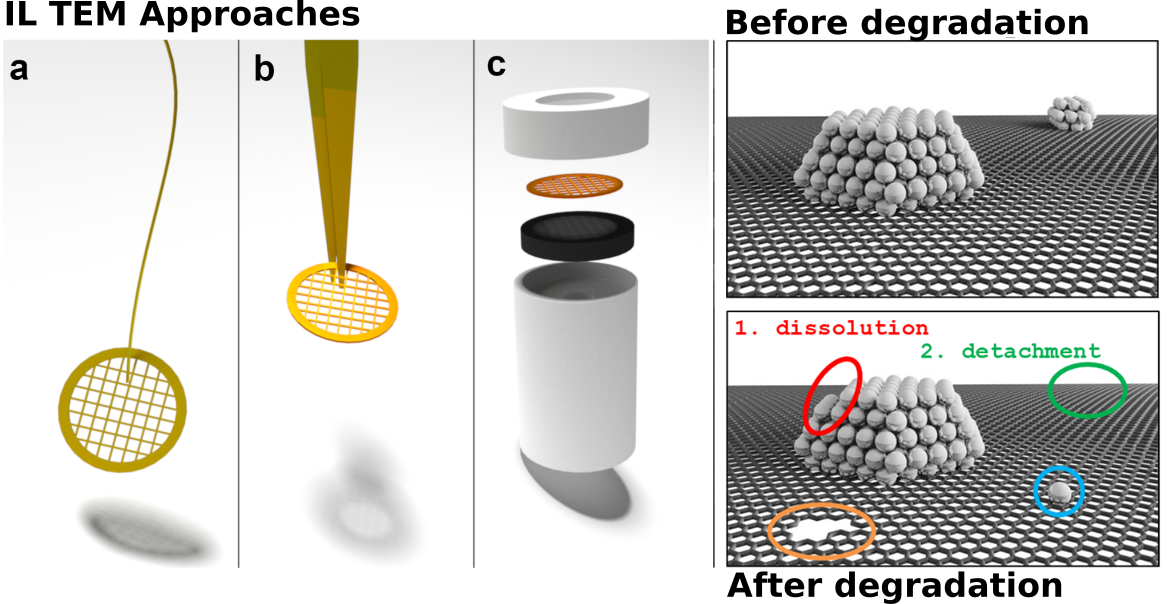 To perform identical location transmission electron microscopy (IL-TEM) investigations, the material of interest was first casted onto a finder TEM grid for the ease of identifying the locations upon subsequent visualizations. The sample was first visualized with the TEM at specific locations to identify its distinctive features. Specifically, the morphology, phase, elemental distribution, oxidation state distribution, and 3D distribution of the sample can be recorded.

Following the initial TEM visualization, the sample can then be loaded into an electrochemical system for performing the experiments of interest. The TEM grid can be freely suspended in the electrolyte (connected via a wire or tweezer), incorporated into an rotating disc electrode tip, or assembled into a testing fuel cell membrane electrode assembly.

After the electrochemical experiments, the TEM grid was air dried, and loaded into the TEM. The exact same location was found with the help of the finder markings, and the exact same set of techniques can be applied and the differences from that of the initial visualization documented.

To fully make use of the versatility of our electrochemical scanning flow cell (SFC) and on line techniques, we take various high throughput synthesis approaches, to “feed” the SFC with samples.

We are working towards a fast and efficient electrochemical and physical screening method for such libraries, to preselect outstanding catalyst compositions by a mostly autonomous testing procedure. Hence, we can cut down the time spent on in depth mechanistic analysis of catalysts which are insignificant and hopefully even predict material properties. 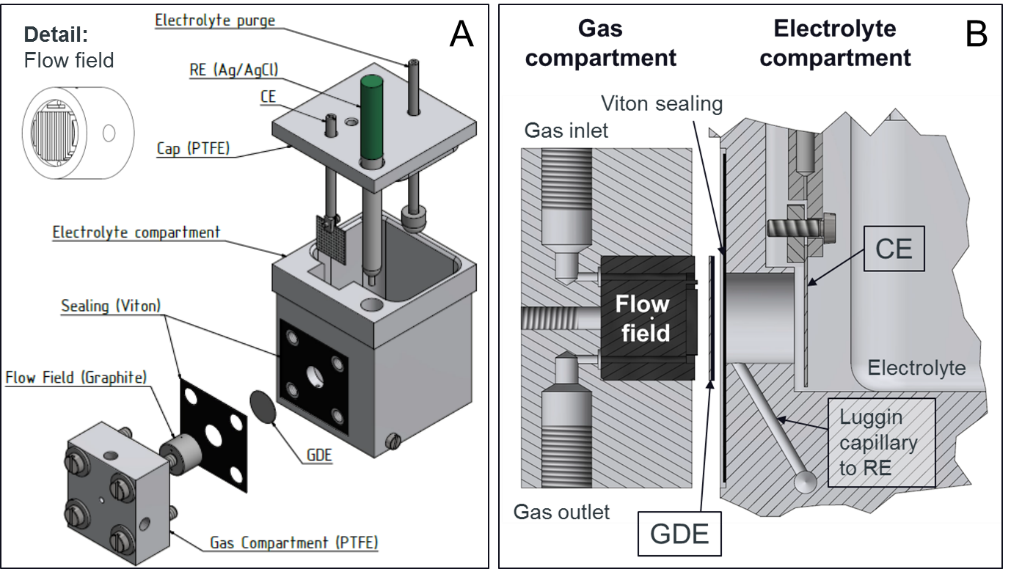 In electrochemical three-phase reactions, such as the fuel cell reactions or CO2-reduction, research in aqueous electrolytes (RDE, SFC i.e.) is limited due to diffusion limitation of dissolved educts to the electrode surface. To evaluate electrocatalysts for those reactions in high-current ranges, which are close to realistic application conditions, different techniques have to be considered.

With a gas diffusion electrode (GDE) set-up it is possible to combine the advantages of fundamental methods such as RDE (only small amount of catalyst needed for testing, simple cell configuration enables fast, low-cost and well-comparable testing) with those of more applied catalyst testing methods like MEA-testing (large potential window enabled by high mass transport, realistic catalyst layers and loadings). Thereby the activity of electrocatalysts in a current density range up to 2 A cm-2 can be evaluated.

Efforts are made to combine GDE also with SFC to track catalyst dissolution also in high-current ranges.

Due to their simplicity and robustness, in some cases electrochemical methods can be advantageous to the coupled techniques. In our research we distinguish several cells in which such methods can be applied:

The most used methods are cyclic voltammetry (CV), linear sweep voltammetry (LSV), chronoamperometry (CA), and electrochemical impedance spectroscopy (EIS). Using a homemade LabVIEW software different combinations of these methods can be created. This is especially useful in the long-term fully automated measurements.